From Deba we took one, then another Euskotren east and transferred to the north-south RENFE line in Donostia. The Euskotren platforms are almost all level with the trains; easy to haul our suitcases on and off. Not so with RENFE Cercanías, whose cars have steep steps to climb up and down. But it was a beautiful day to travel by train. 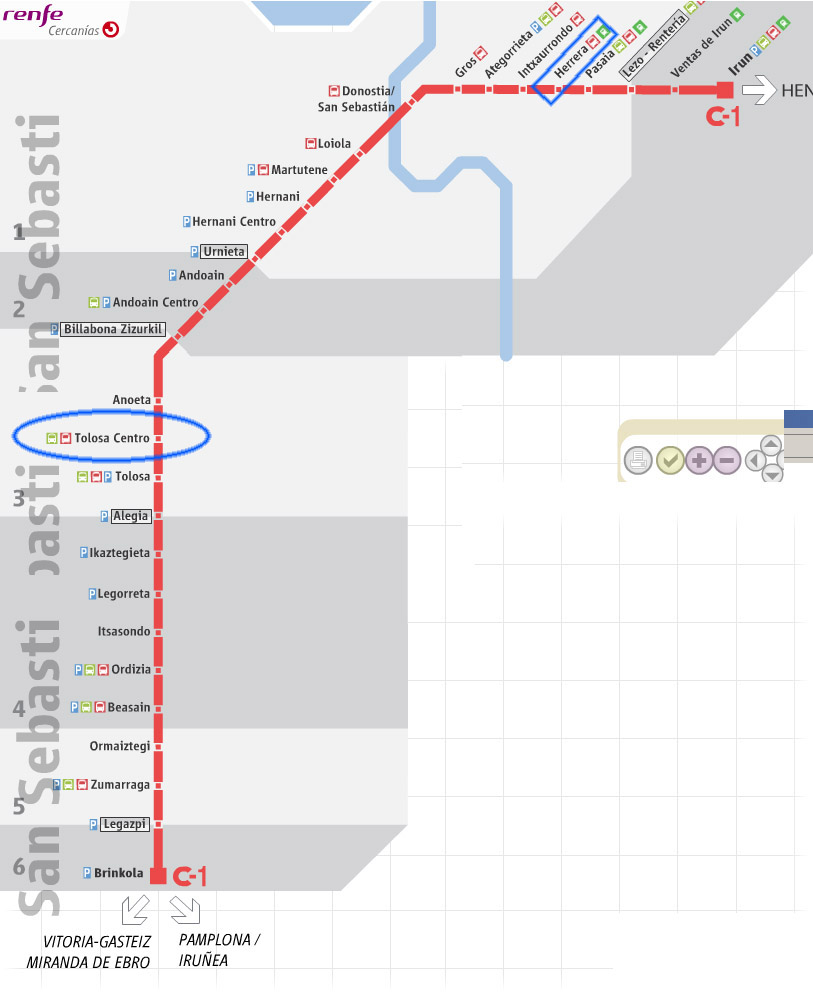 We texted Garikoitz Murua of GKo Gallery when we caught the RENFE southbound so he could meet us on arrival in Tolosa and help us take our suitcases to the gallery. As a surprise, we put on our red and black plaid wool toques with brown beards (we got them from CANFOR’s warming hut at the Canada Winter Games in Prince George) as we disembarked the train. He laughed and took a few photos of us as we left the platform. 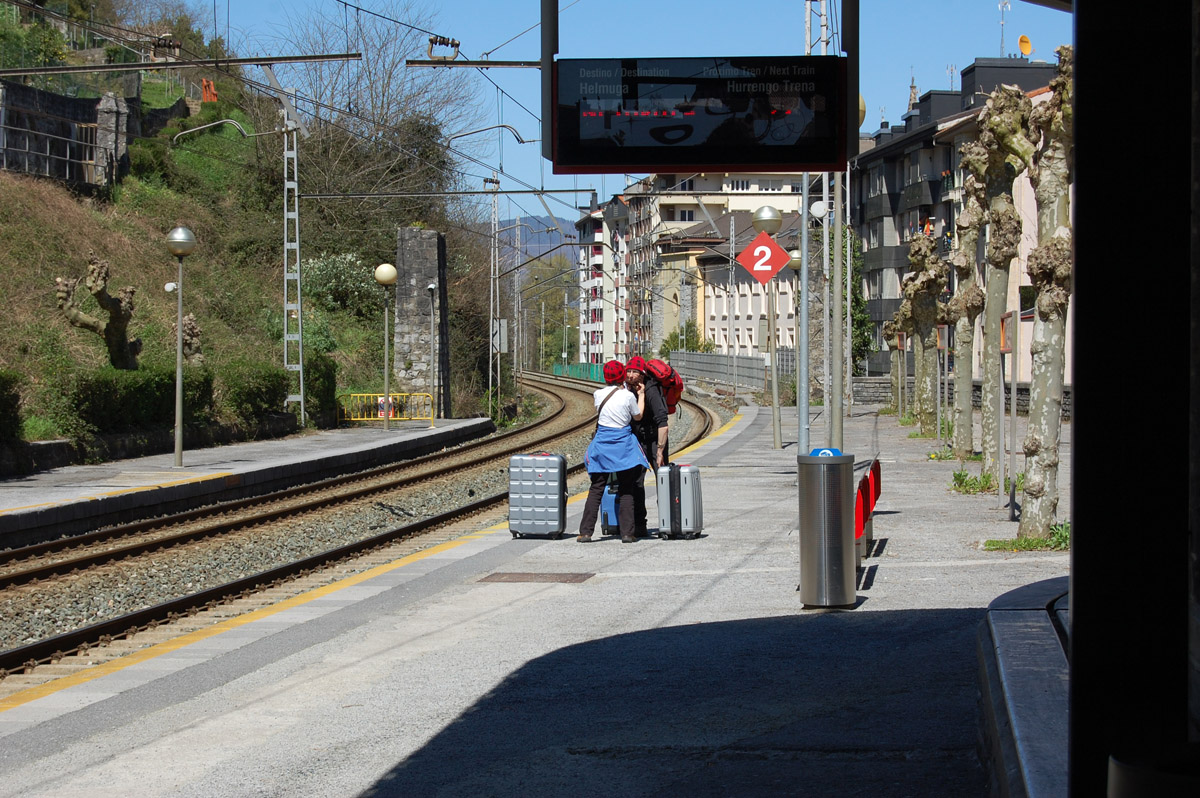 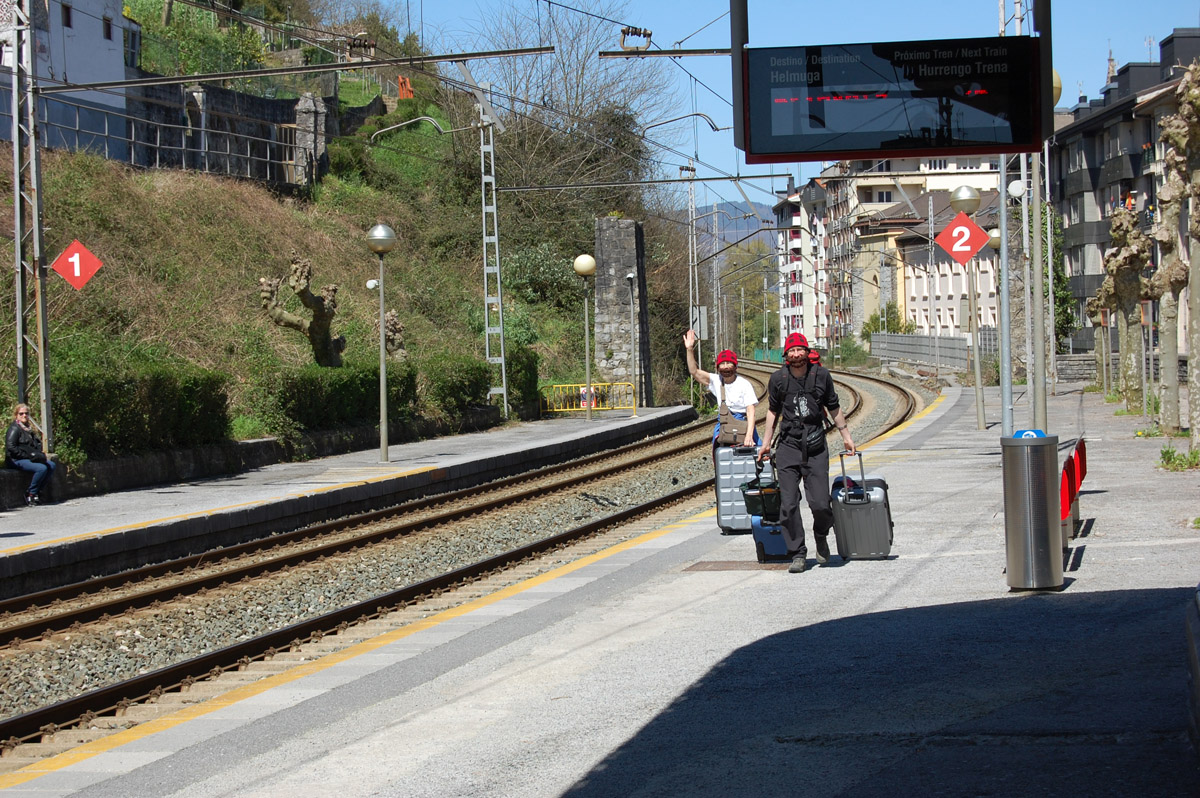 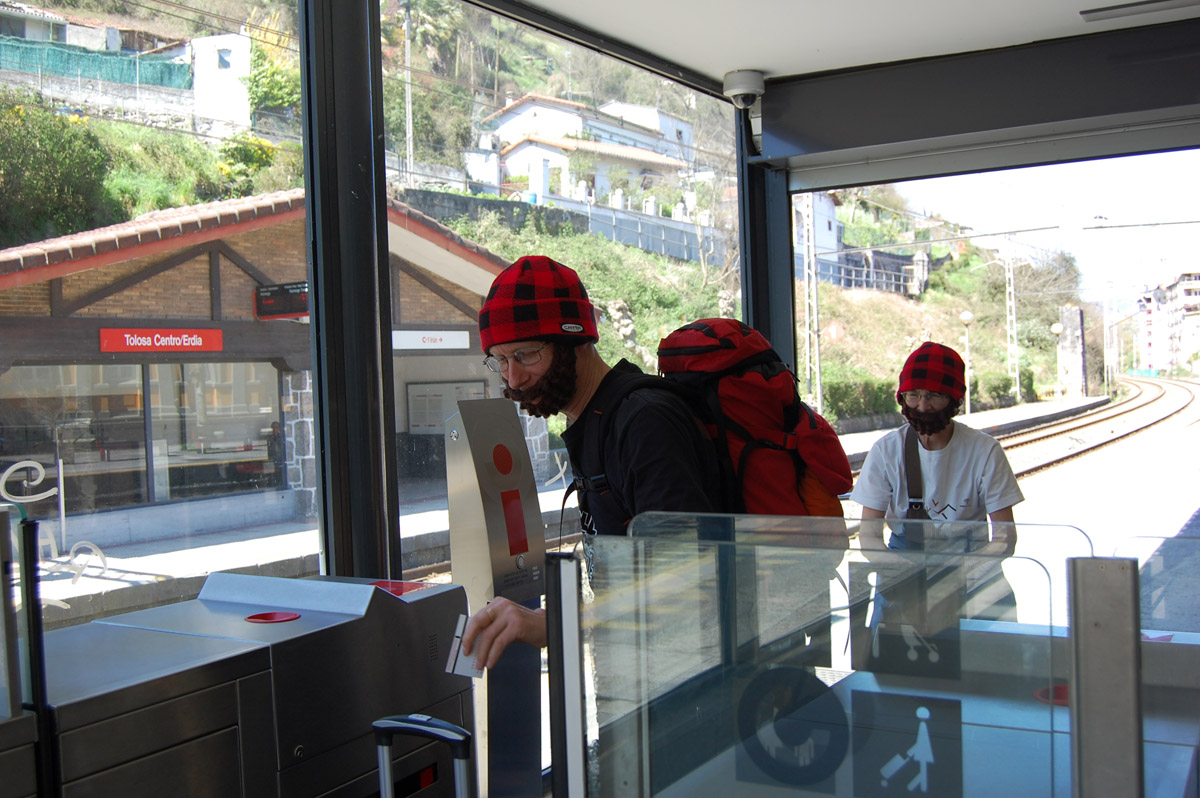 GKo Gallery is only a few blocks away from the train station, so we took everything there, dropped off our art, then rolled our personal belongings back a few blocks to Garikoitz and Kizkitza’s apartment. We’d then return to GKo to start unpacking the art and doing some preliminary arrangements to start the process of hanging everything. 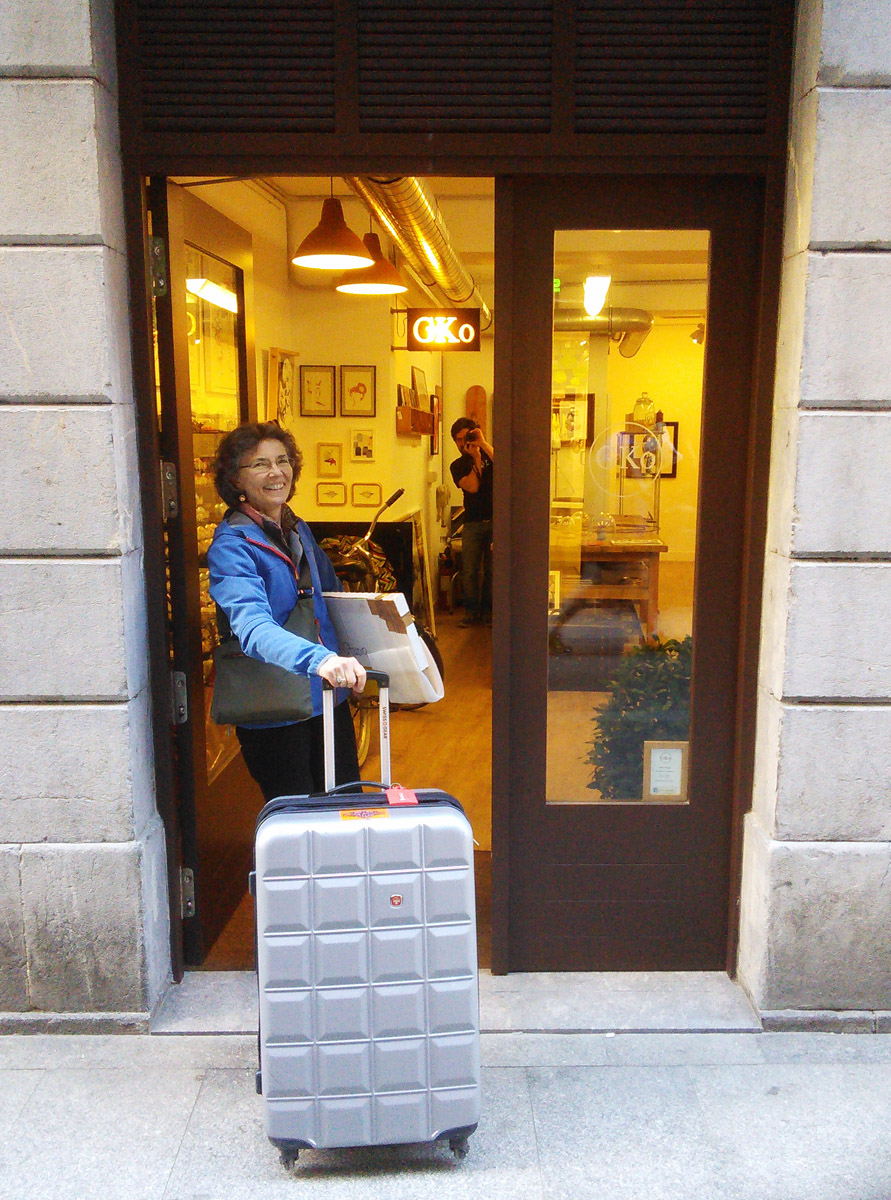 Garikoitz and Kizkitza have a beautiful place on the fourth floor, overlooking the central commercial district which is designated pedestrian-only from the next block over to the Oria River. It was extremely generous of them to accommodate us, and we felt very fortunate to have our own room right in the centre of town, just ten minutes’ walk from the gallery, the market, the Casa de Cultura; five minutes from the TOPIC puppet museum; fifteen minutes from Box.A Arte Elkarte studios. Wonderful. 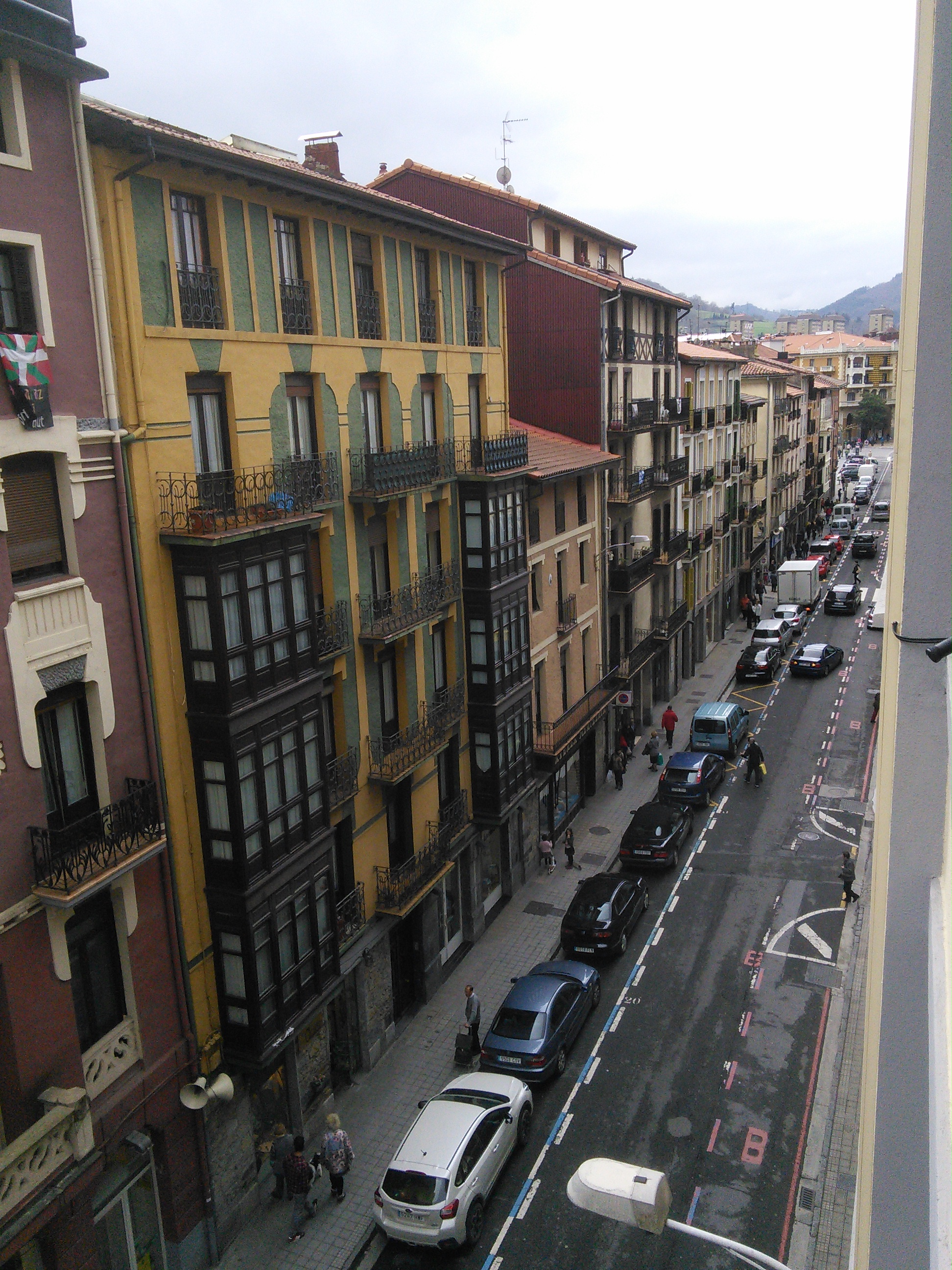 Just up the street is a classic millinery store that has been in business for several generations. Drawers and shelves and boxes of buttons, threads, needles, pins … we would be there soon to buy some special pins for mounting matted prints on the gallery walls!

Central Tolosa is full of every kind of shop, all independent – we never saw any chains. Each block seems to have several bars, a bakery, shoe store, jeweler, deli, maybe a fish store, toys. It would take weeks to visit them all. There are several plazas with bars and shops facing onto them, and people of all ages wandering about. 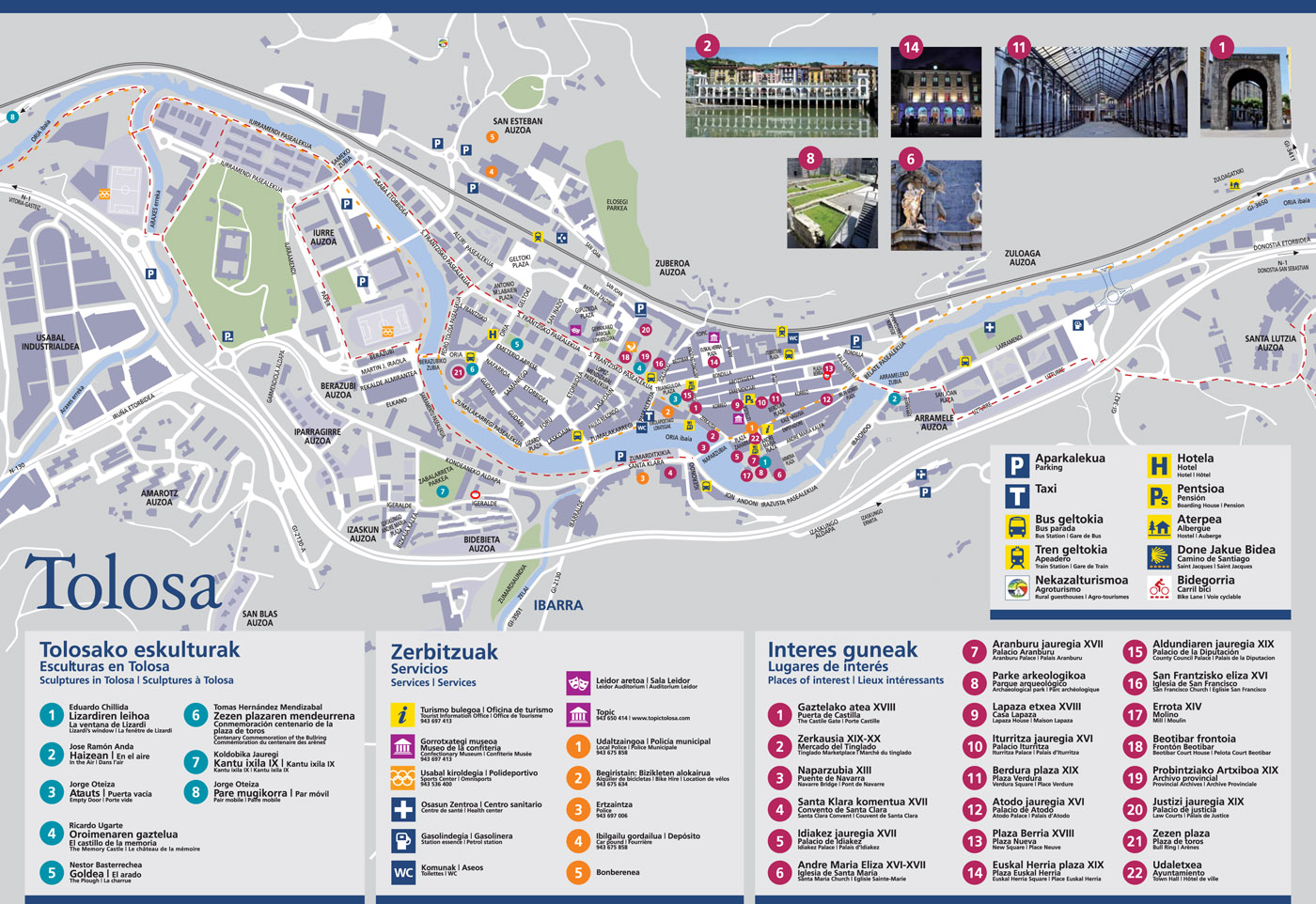 The Garia Bakery is half a block from GKo Gallery. Operated by Raúl and Amaia, they make a variety of delicious levain breads (traditional sourdough), including whole grains and some pastries. They were always welcoming and generous, especially having learned that I had worked at Uprising Breads Bakery in East Vancouver – originally modeled on the Basque Mondragon cooperatives – for 11 years. What a pleasure! 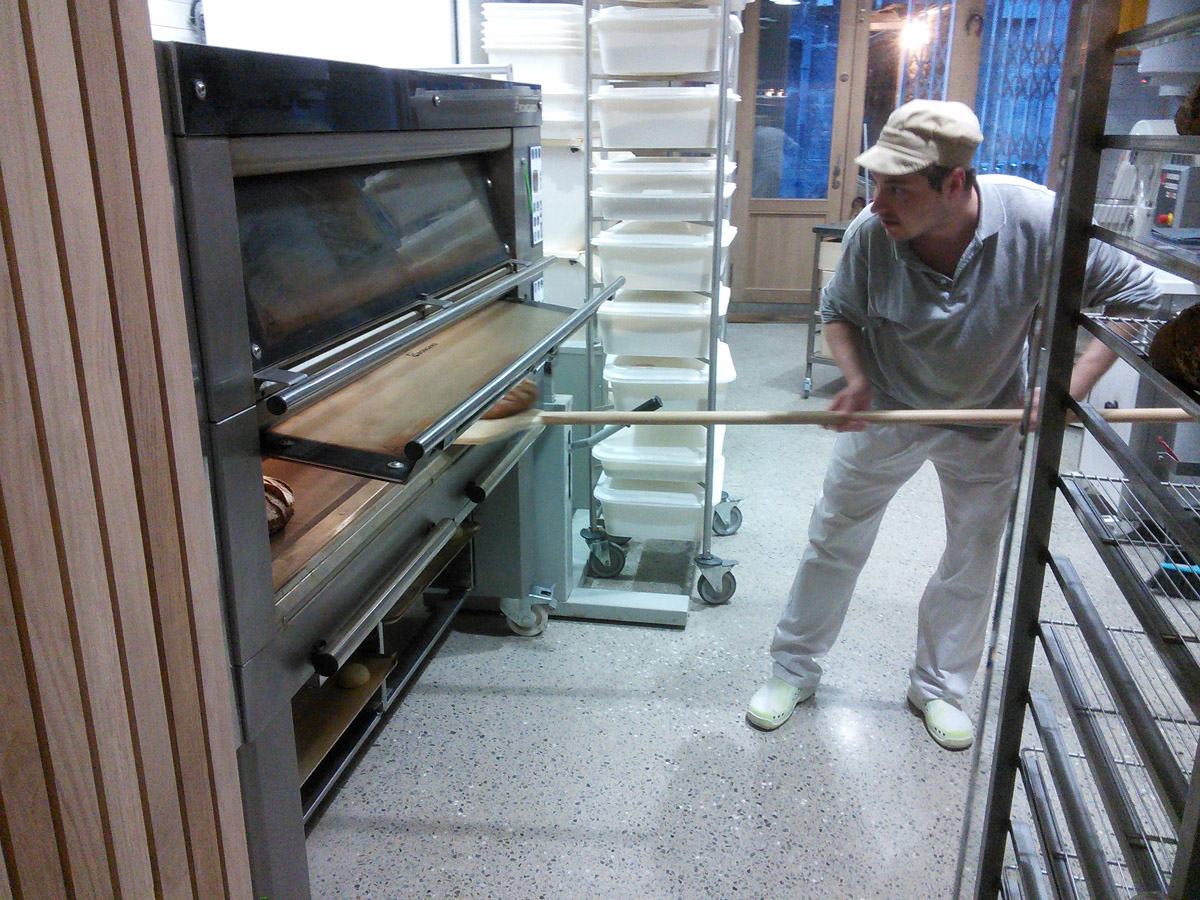 Unloading the oven at Garia. 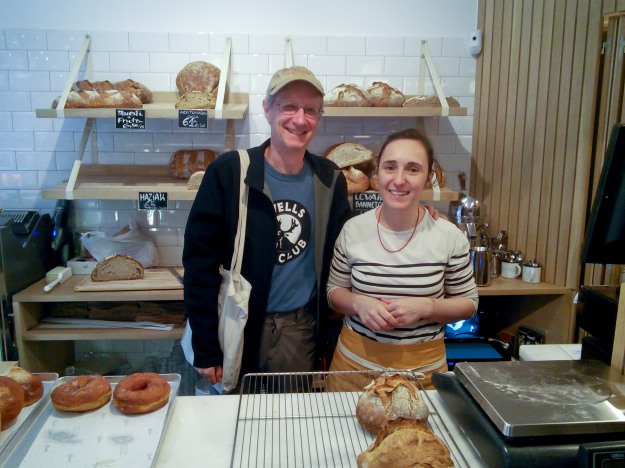 Bill behind the till with Amaia. 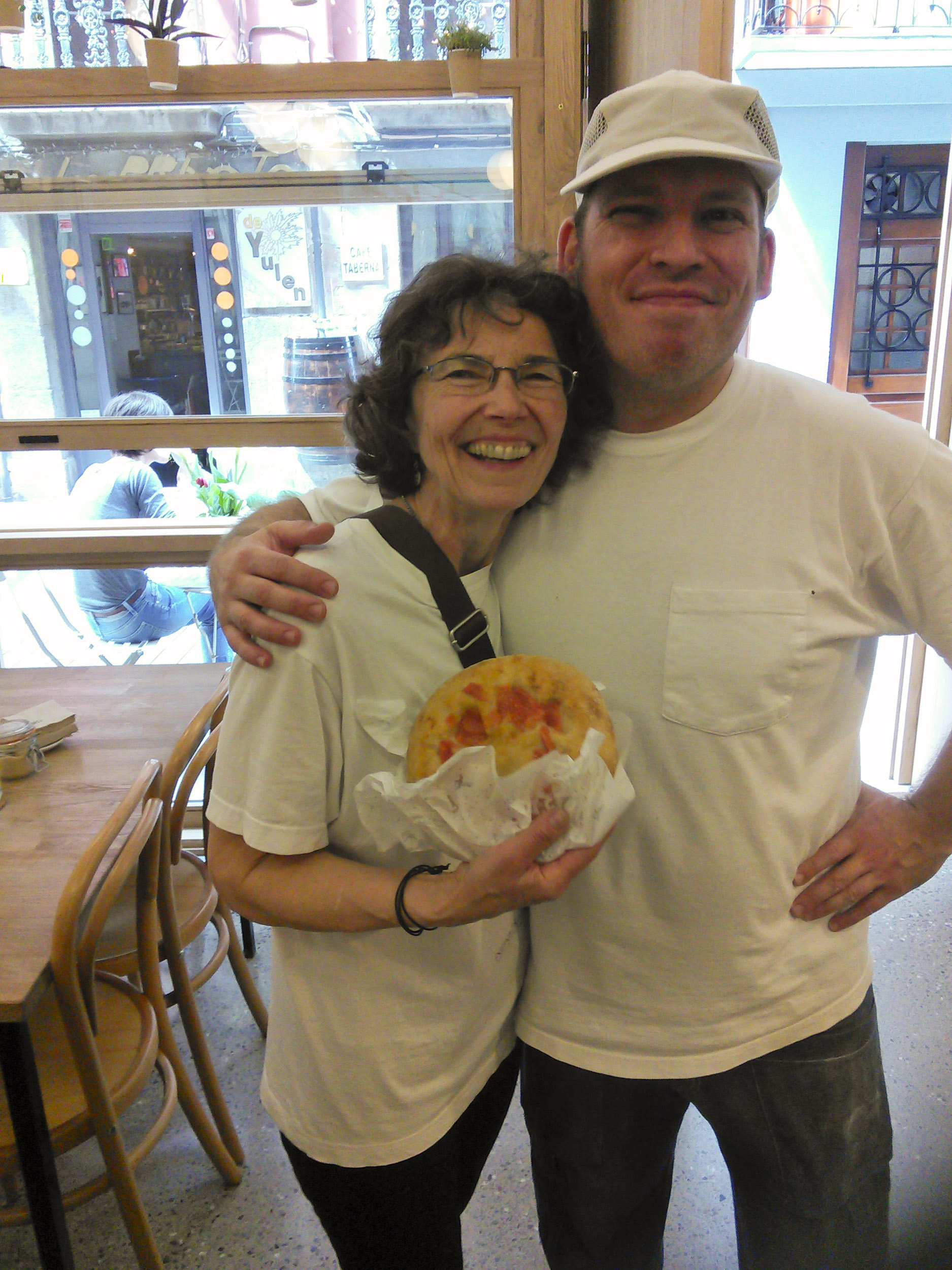 Claire with one of Raúl’s tasty treats.