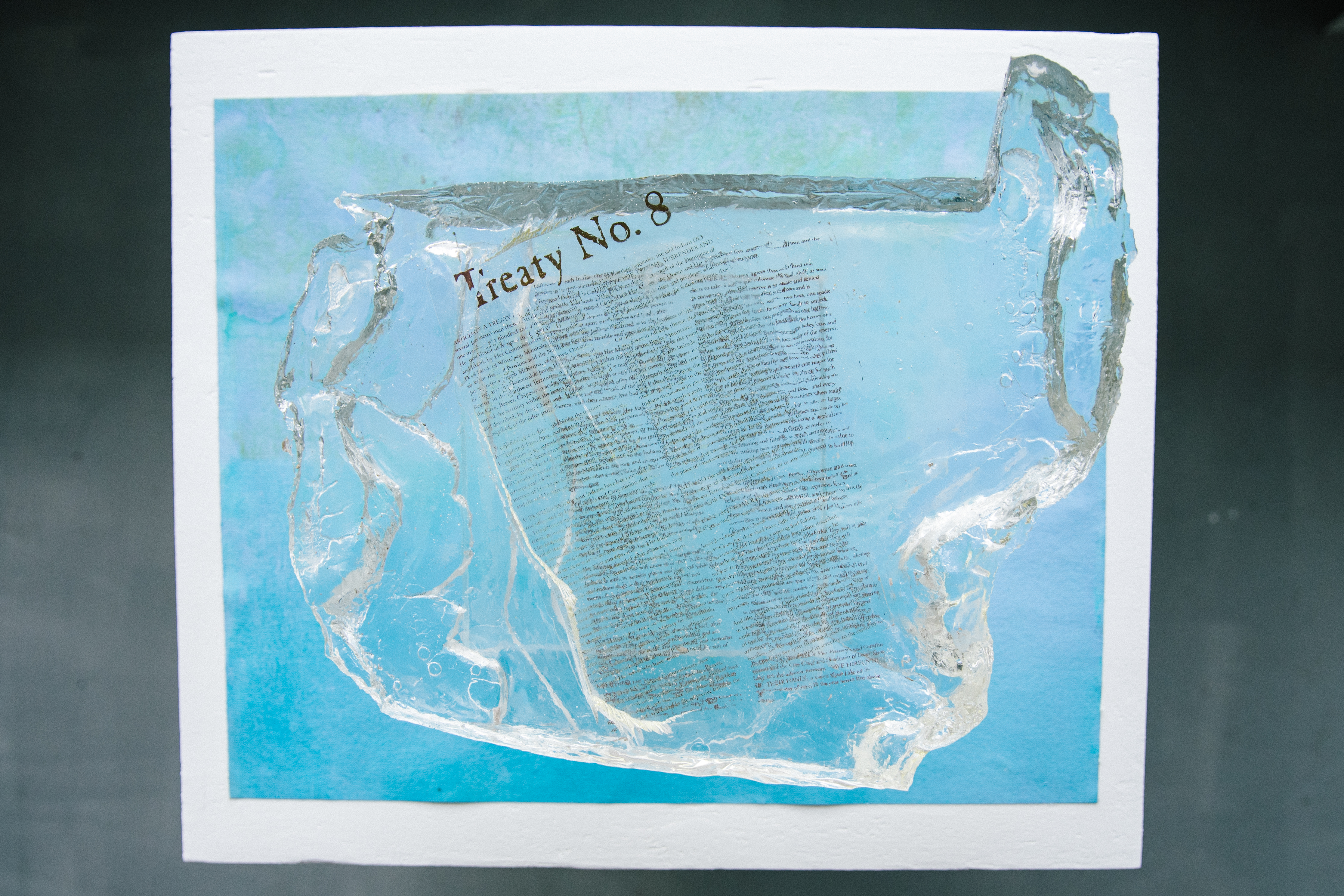 Like the “Stakes in the Peace” terracotta field with screen printed stakes in the group exhibition Disturbances in the Field  (at the Omineca Arts Centre), “Reservoir” deals with the Site C. Since BC Hydro’s proposed dam lies within Treaty 8 territory – a treaty signed in 1899 – I visualized the reservoir submerging the treaty. So I screen printed a two page layout of the text of Treaty 8 on mylar, then cast it in resin in a clay mold shaped like BC Hydro’s renderings, with a small corner of the treaty remaining above the surface of the reservoir to represent my hope that we can still stop this project. 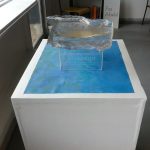 Side view of “Reservoir” with Dane-zaa screen printed on the side of the acrylic stand (“Our children will use the Peace River in the future”). 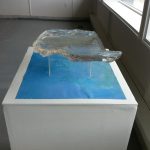 Side view of “Reservoir” showing Cree syllabics for “mamahtâwisîpiy” (magical, supernatural or sacred river of wonderment).

On the sides of the acrylic stand are Cree and Dane-zaa words for the Peace River, in tribute to the strength of these cultures and the power of their languages. And as a reminder that we are all treaty people, as our friends in the valley have patiently explained. Claire gave me a piece of painted canvas to place under the resin to catch light and colour – another element of hope to balance the daunting challenge we face. 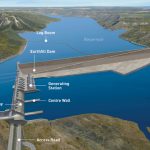 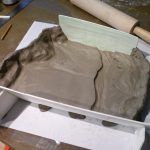 Clay mold closeup with land forms approximating the valley as it is today. 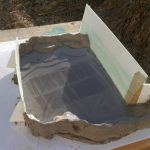 After the first pour with page two of Treaty 8 fully submerged. 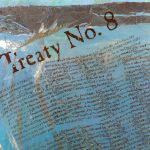 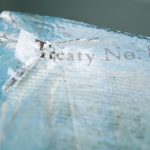 Closeup of the surface of “Reservoir” with Treaty 8 still resisting the flooding. Photo courtesy of Denis Gutiérrez-Ogrinc. 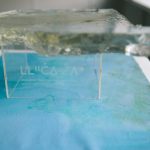 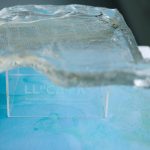 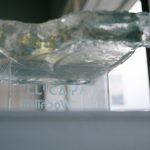 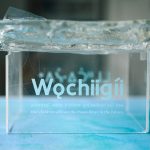 For the “All for Water” exhibition at Two Rivers Gallery in Prince George (concurrent with “An Exercise in Listening”), I made a new version of Reservoir. I enlarged the screen printed text to increase its legibility, and placed it under a thin pool of resin to symbolize the flooding of treaty lands. The Dane-zaa Wǫchiigíi and the Cree word mamahtâwisîpiy – both printed on birch bark – flank the treaty on each side. (These are the main indigenous languages of Treaty 8 territory.)

Thanks to Meghan Hunter-Gauthier, Assistant Curator, and to George Harris, Curator & Artistic Director at Two Rivers Gallery for their patience and persistence in dealing with these fragile works. Also thanks to Art Napoleon for translation of mamahtâwisîpiy, and to Verena Hofmann & Treaty 8 Tribal Association for the translation of Wǫchiigíi.