A few weeks before leaving Canada, I emailed Juantxo Garmendia, a metal fabricator and sculptor I had met through master papermaker, Juan Barbé in the fall of 2013. I had seen some of Juantxo’s work first hand, and also knew that he had built a remarkable “Naginata fabrication” fibre shredding machine for Juan. We wouldn’t have room in our luggage for the two metal rings we originally wanted to use to hang Claire’s work, so I sent Juantxo technical drawings and asked him if he could make them, and if so, how much would they cost. He said sure, easy, but he wouldn’t charge for this! So I decided I would return the favour by designing and printing some shirts for him, using copper ink as the base.

Shirt design based on one of Juantxo’s pieces.

I had assumed that we would pick up the rings at his shop or rendezvous in Zizurkil or Billabona, then train back to Tolosa. However, when we rolled our two suitcases of art to GKo Gallery on April 8, the rings were already there; Juantxo had driven to Tolosa to drop them off for us ahead of our arrival! How very kind. 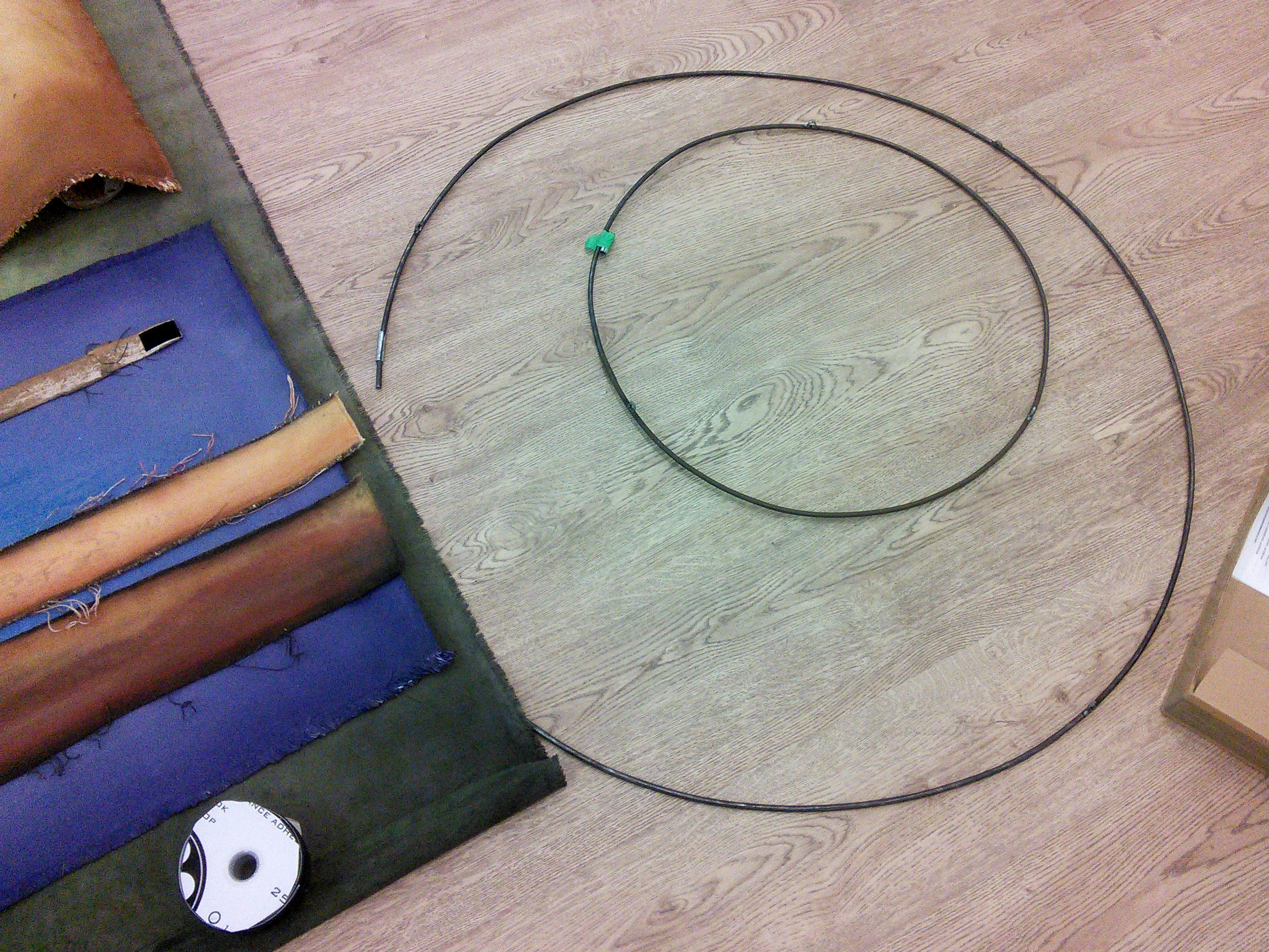 Juantxo’s metal rings that awaited us at GKo.

After getting settled in our room at Garikoitz and Kizkitza’s a few blocks away, we unpacked and laid out our pieces around the room according to the miniature maquette we had made back at home; Garikoitz had sent us very accurate wall and ceiling measurements, so there were no surprises; everything fit! 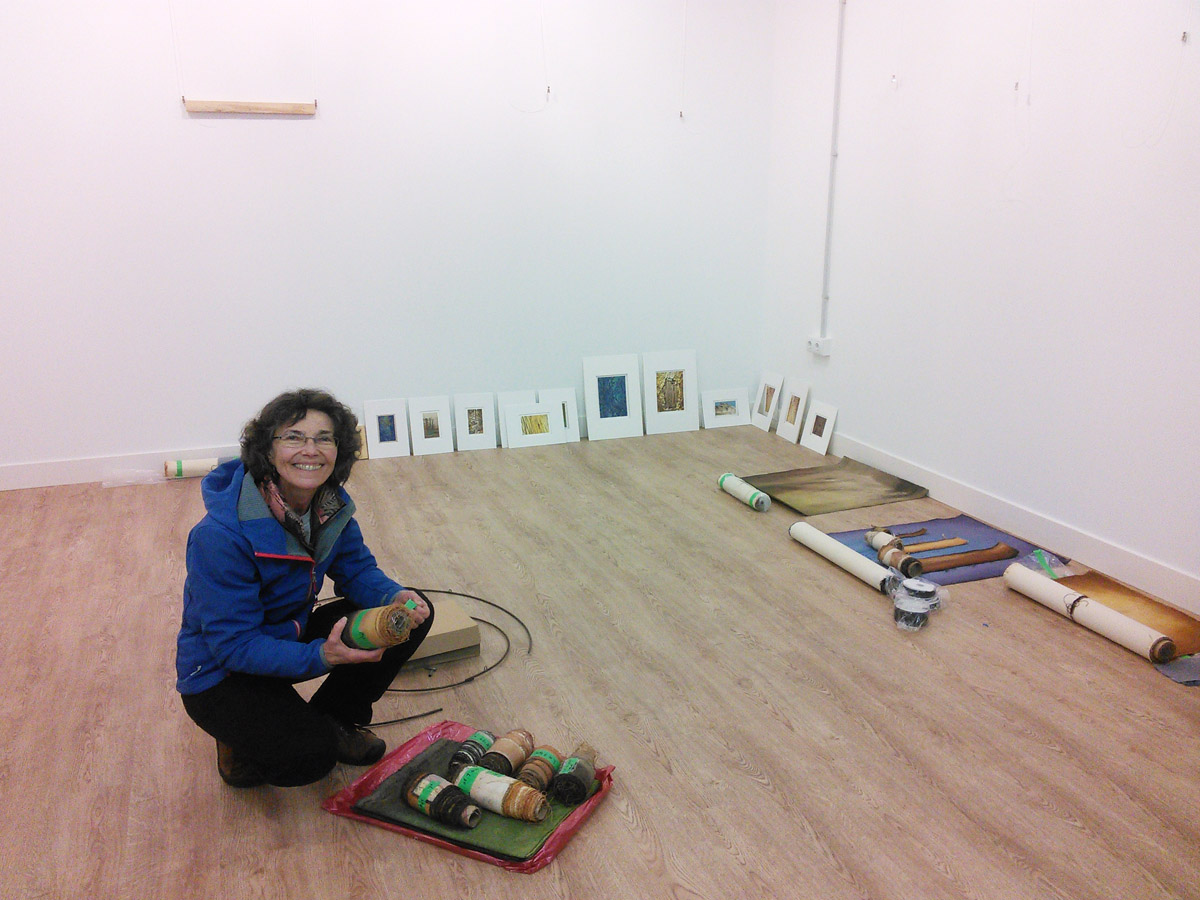 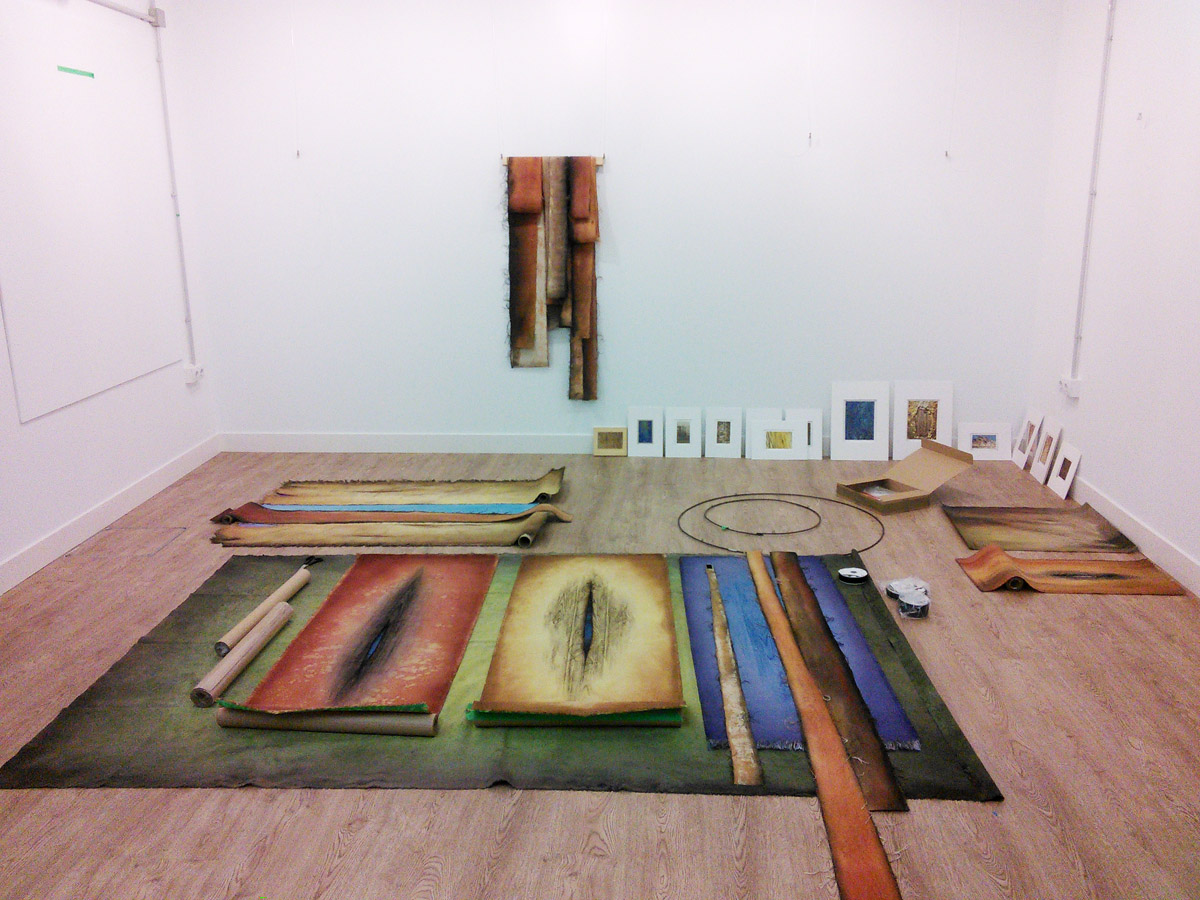 Unpacked and unrolled; ready to arrange and hang. 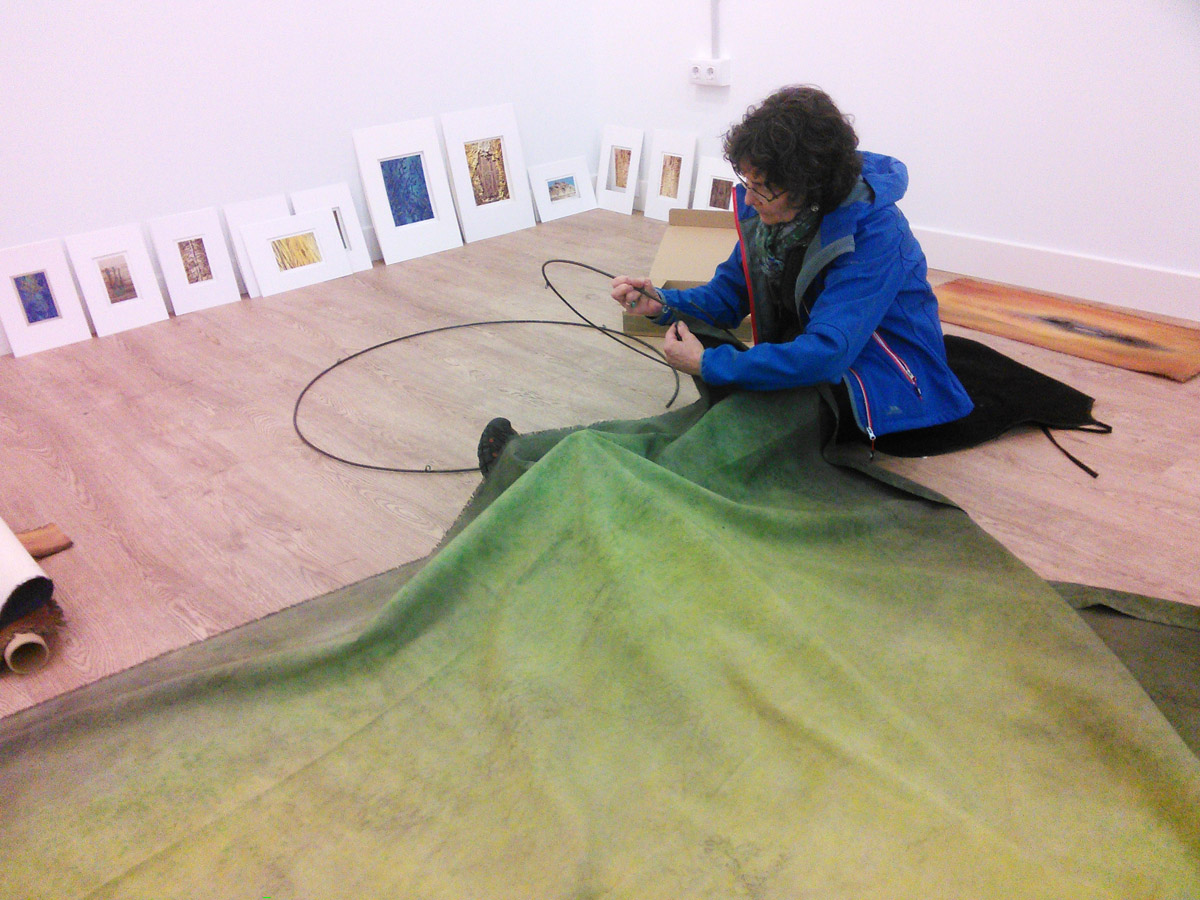 Claire ready to attach the central fabric column of her piece “Grove” to Juantxo’s metal rings. 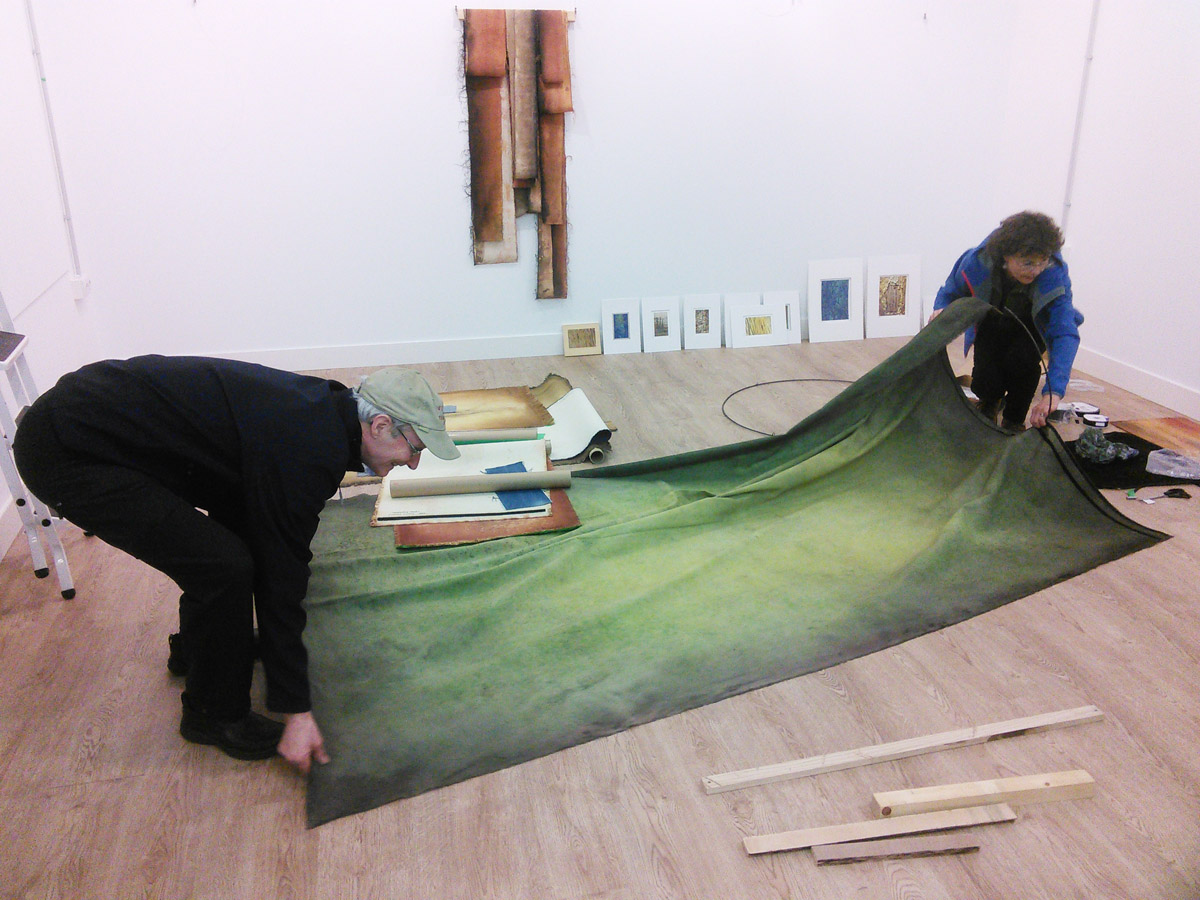 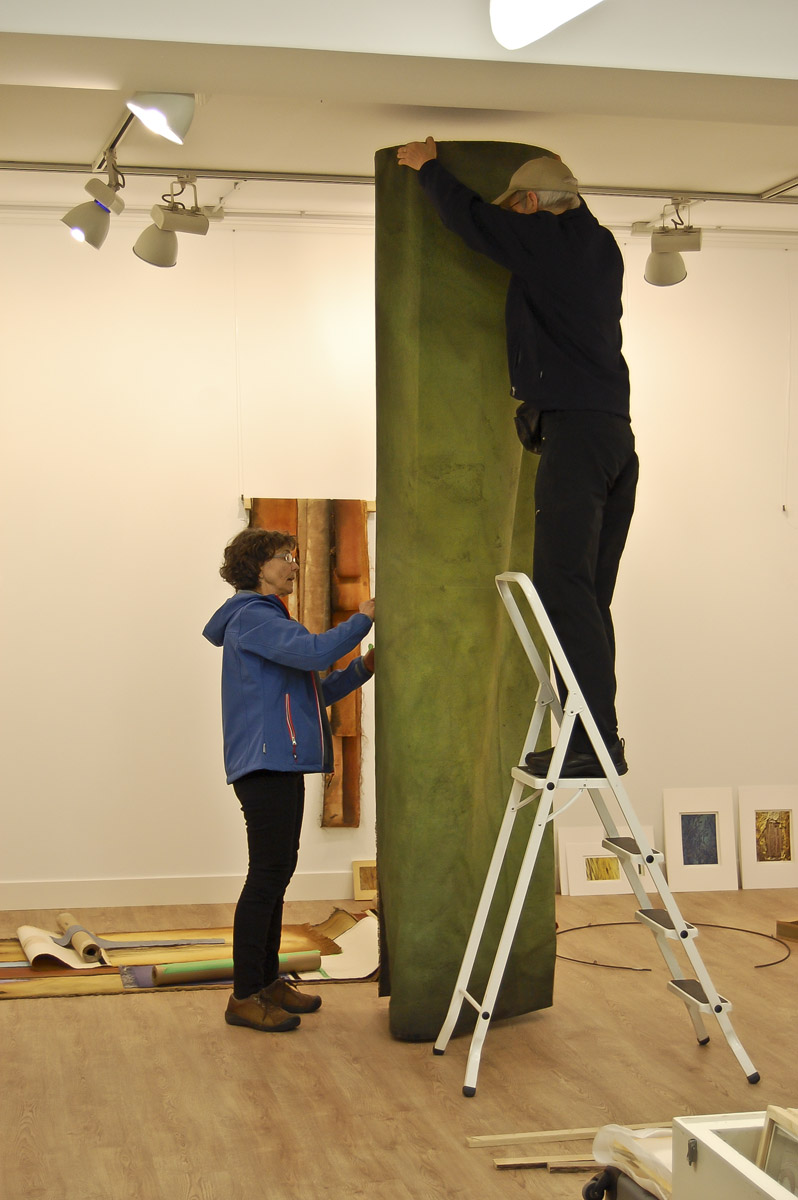 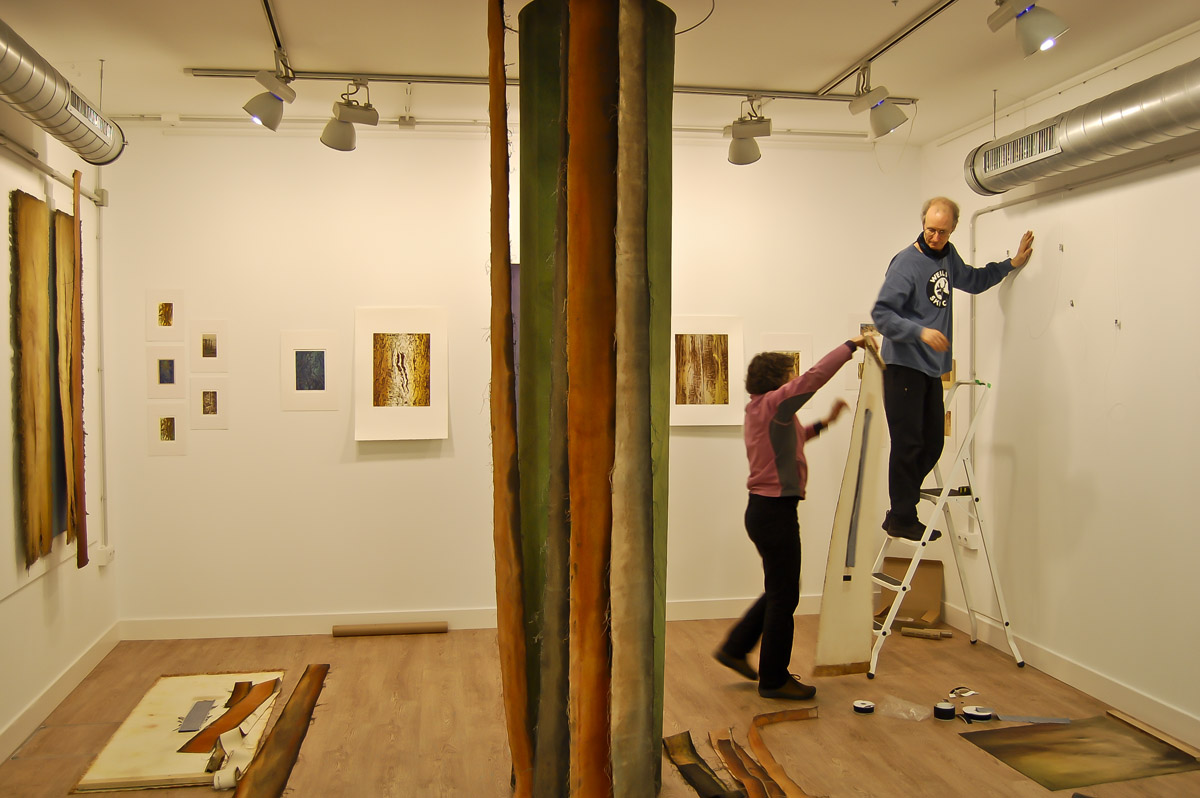 We first hung Claire’s green fabric column with her torn, stained canvas trees encircling it. Then we anchored her larger pieces and my larger prints before devising an arrangement for my miniature prints in between. 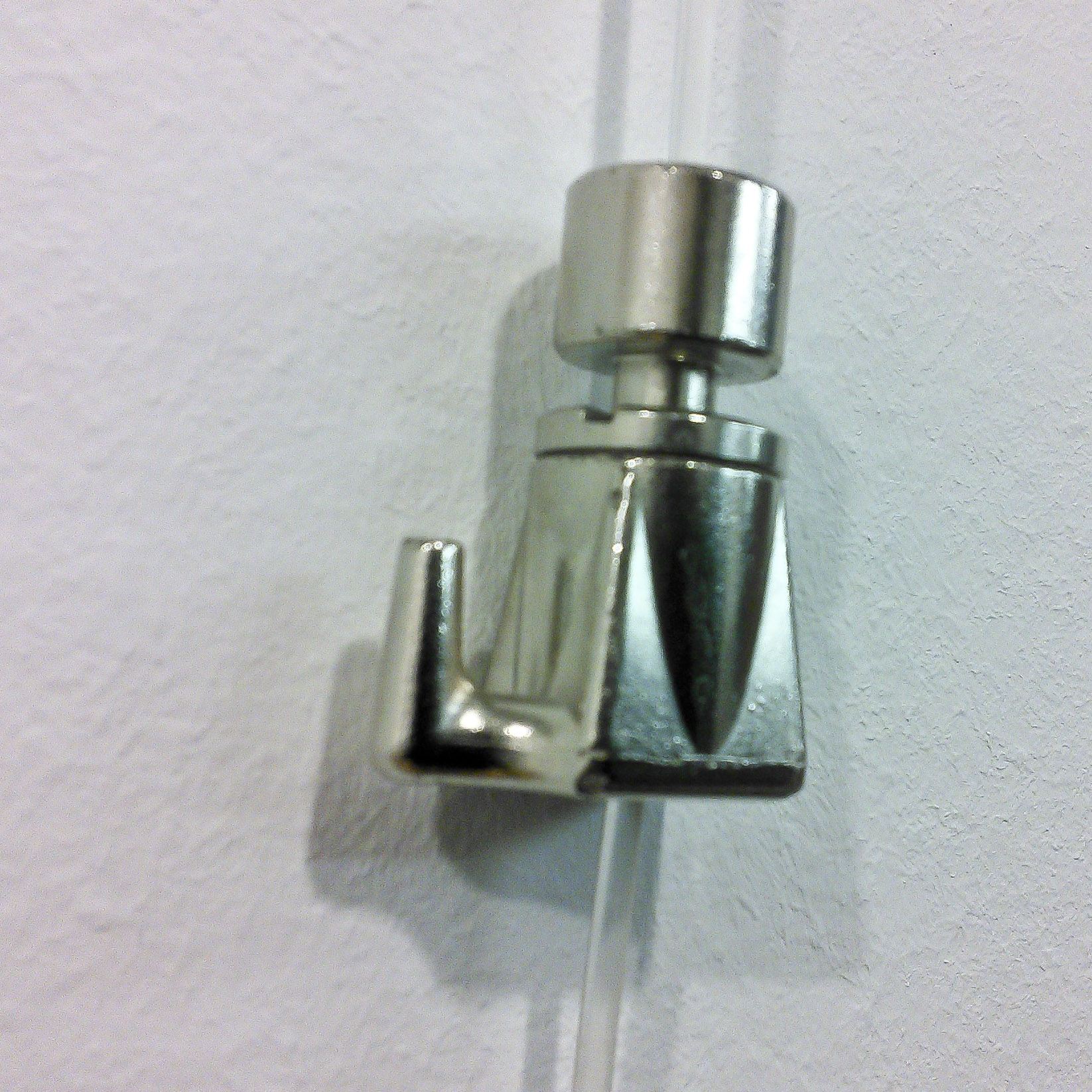 Garikoitz had milled up a few wooden cleats for some of Claire’s paintings that “float” off the wall; we cut a few more wooden bars at the BoxA Arte Elkarte studio. Other pieces could hang from the gallery’s heavy duty nylon with adjustable stainless hooks – nice system! 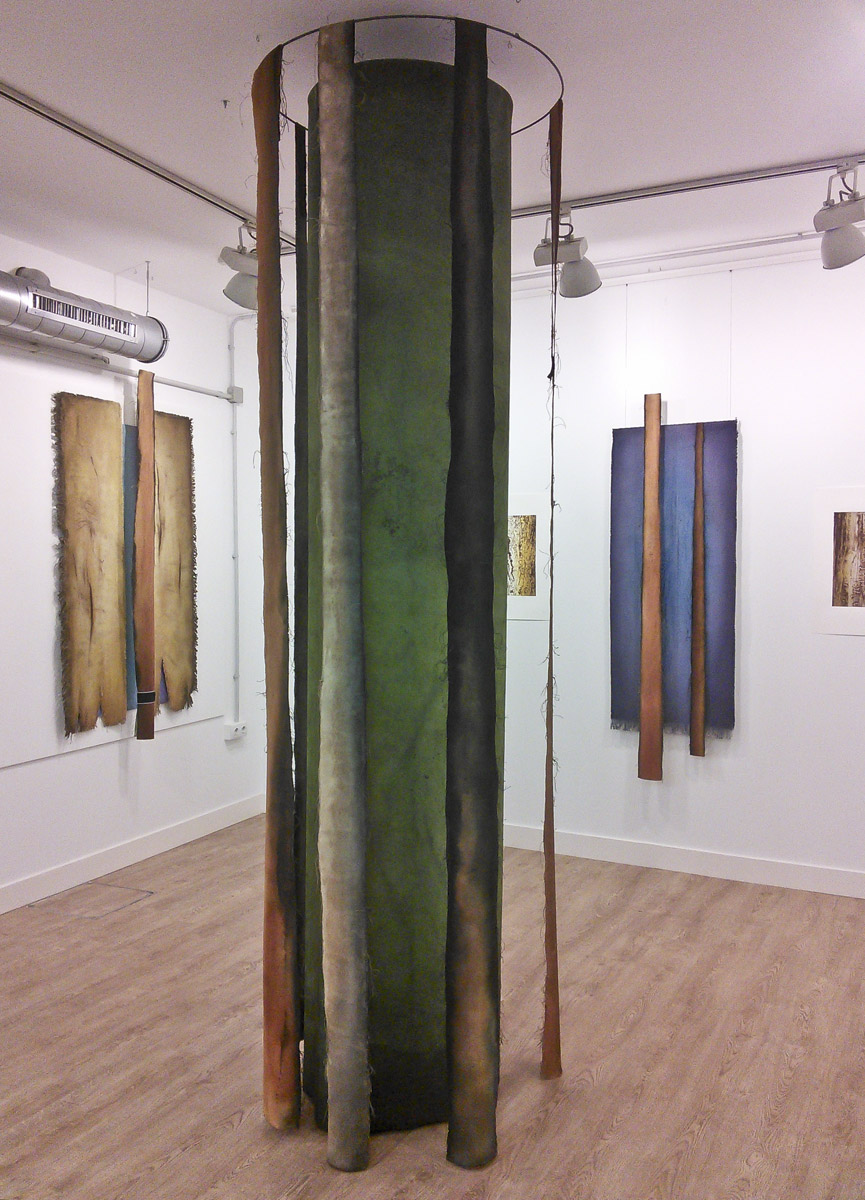 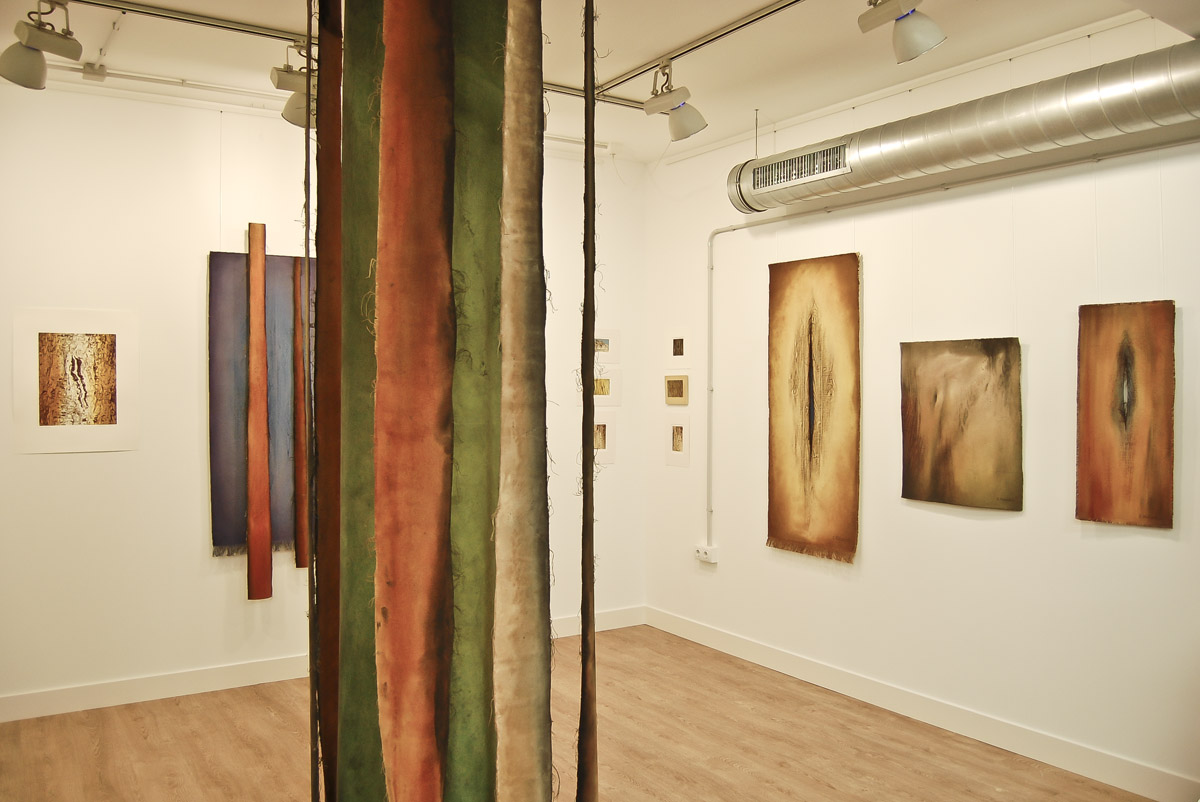 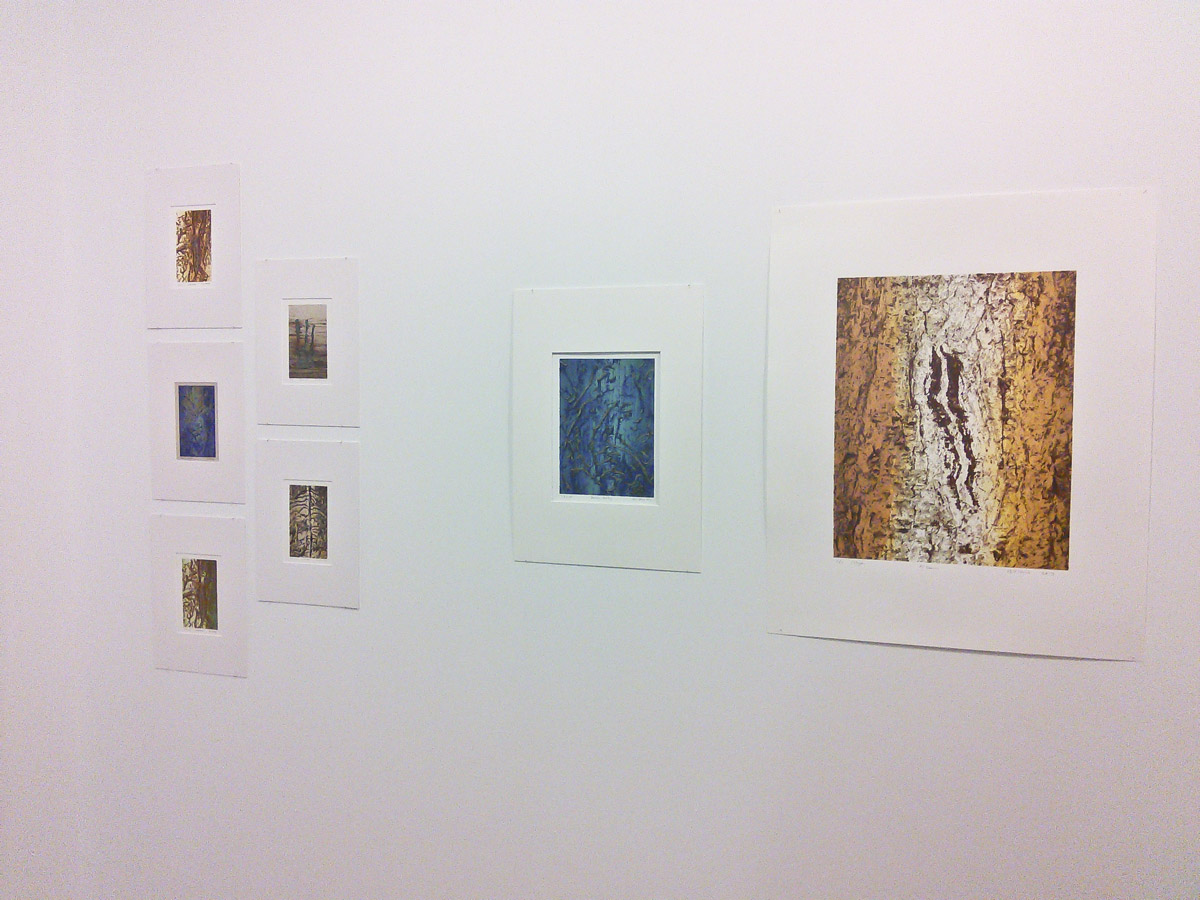 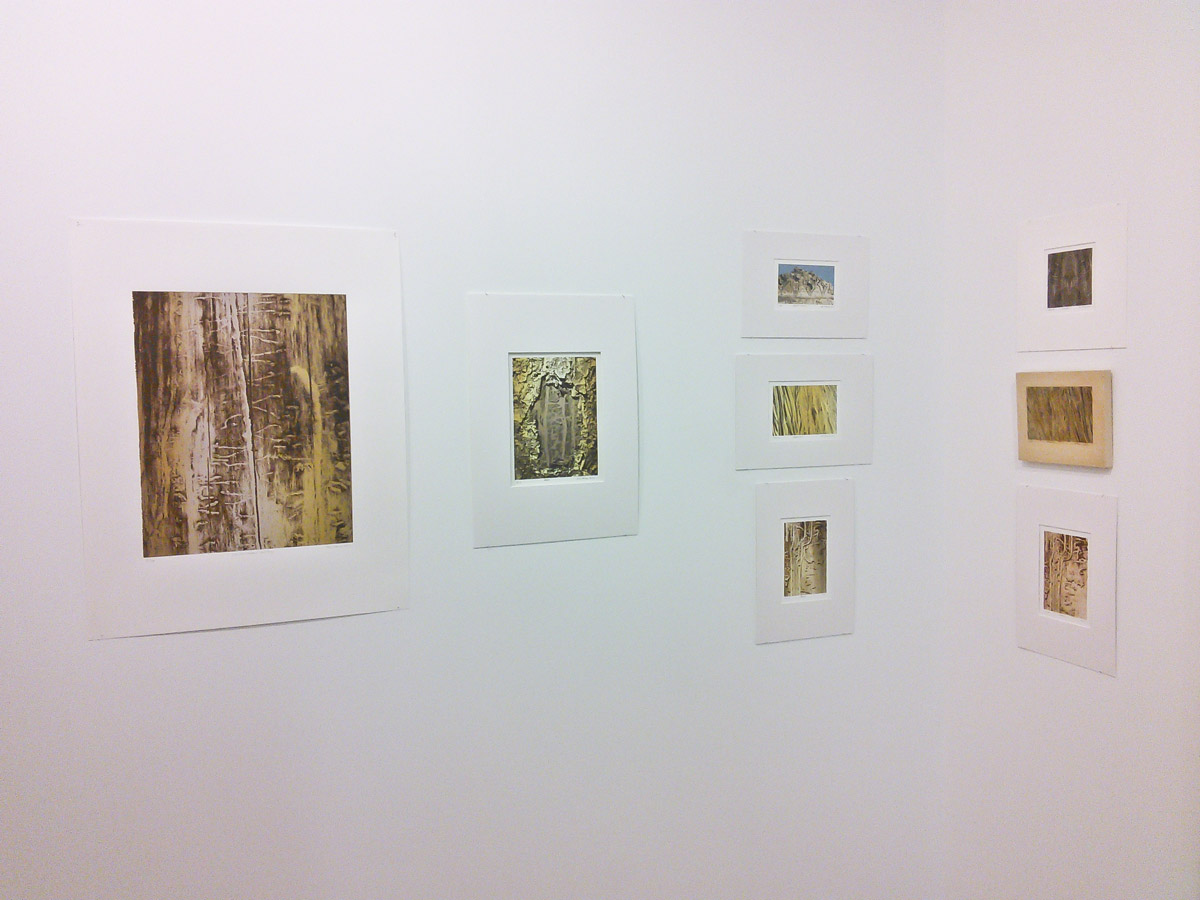 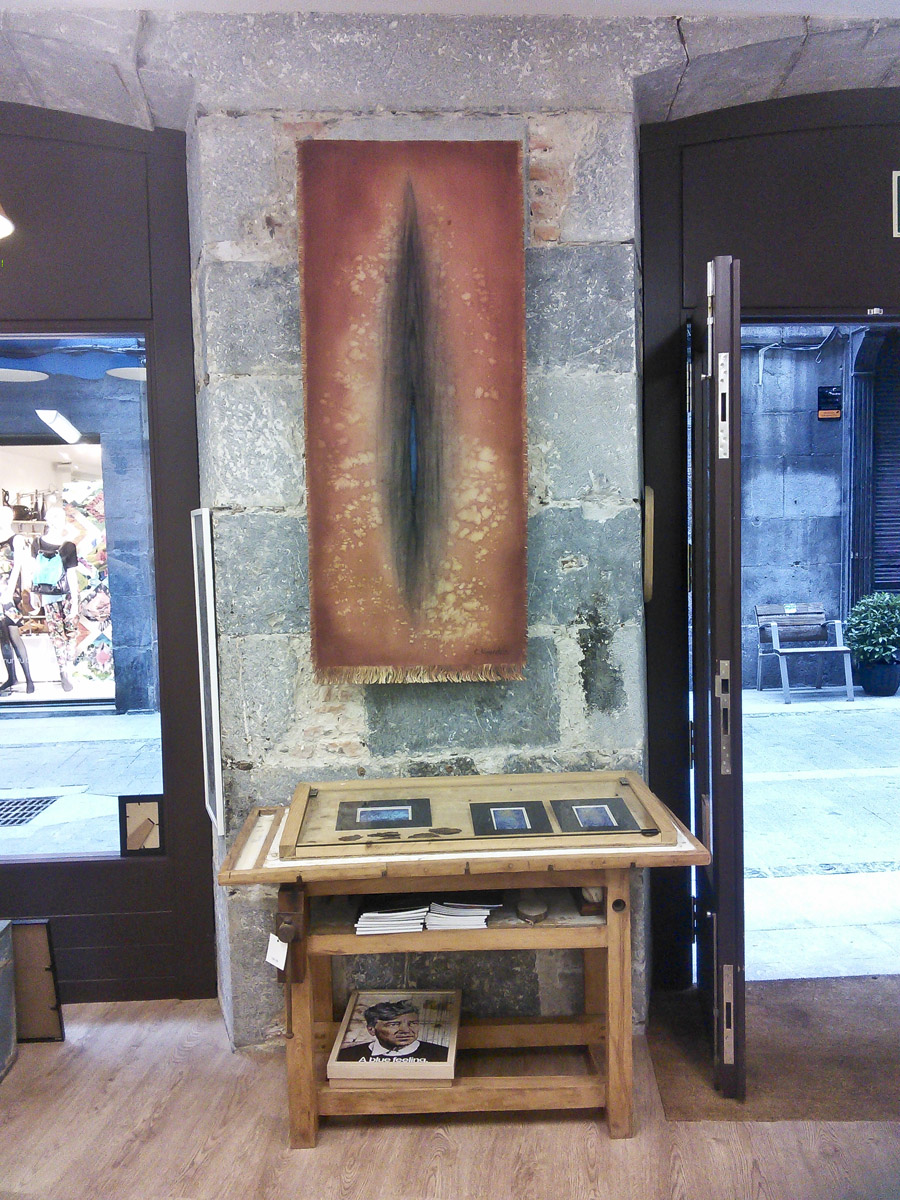 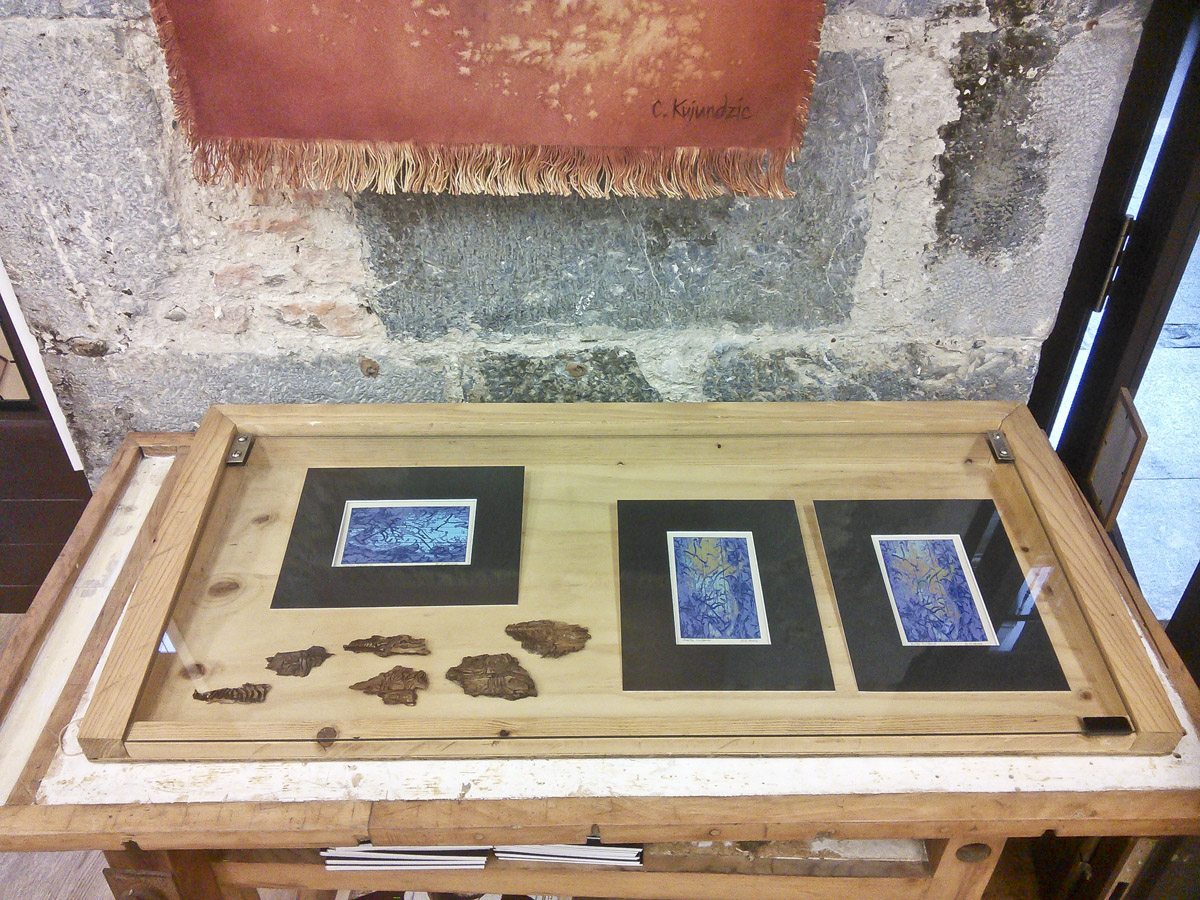 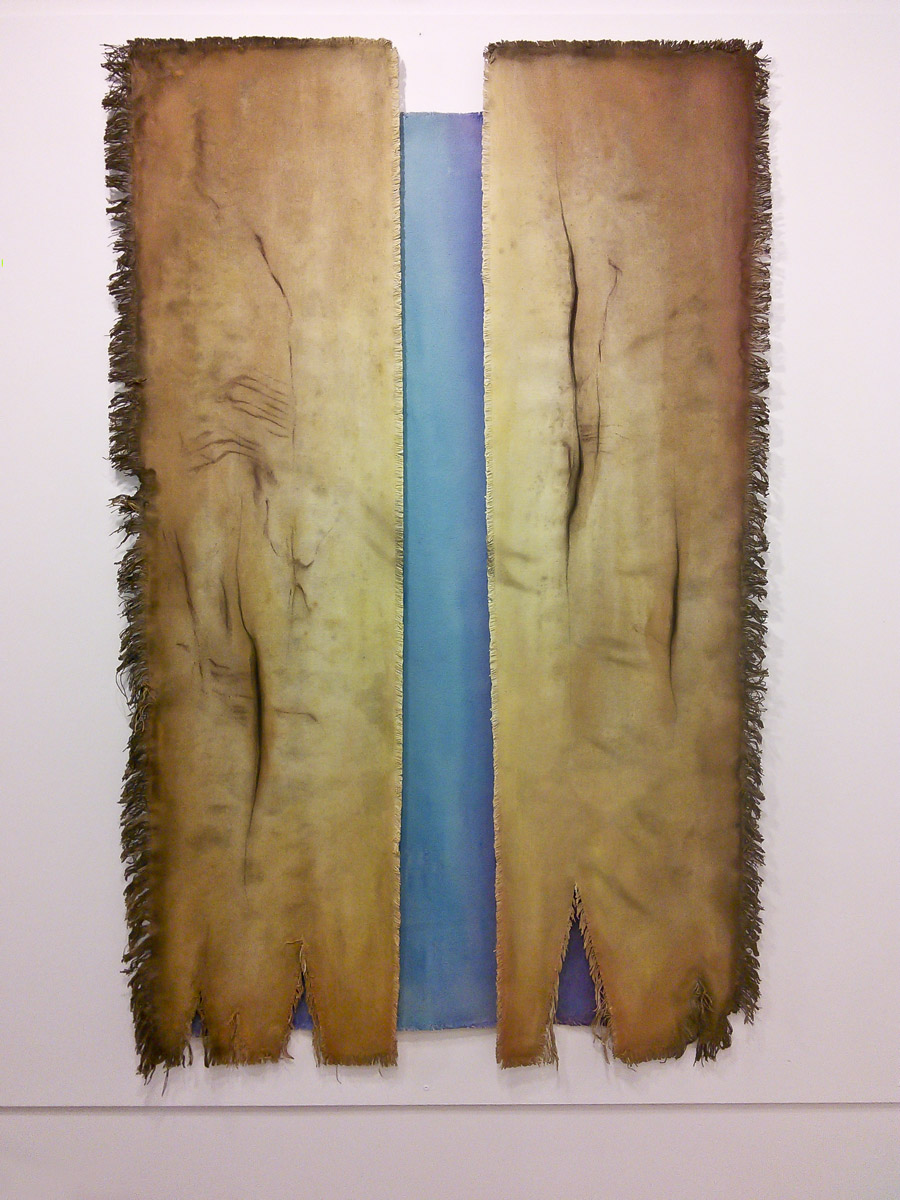 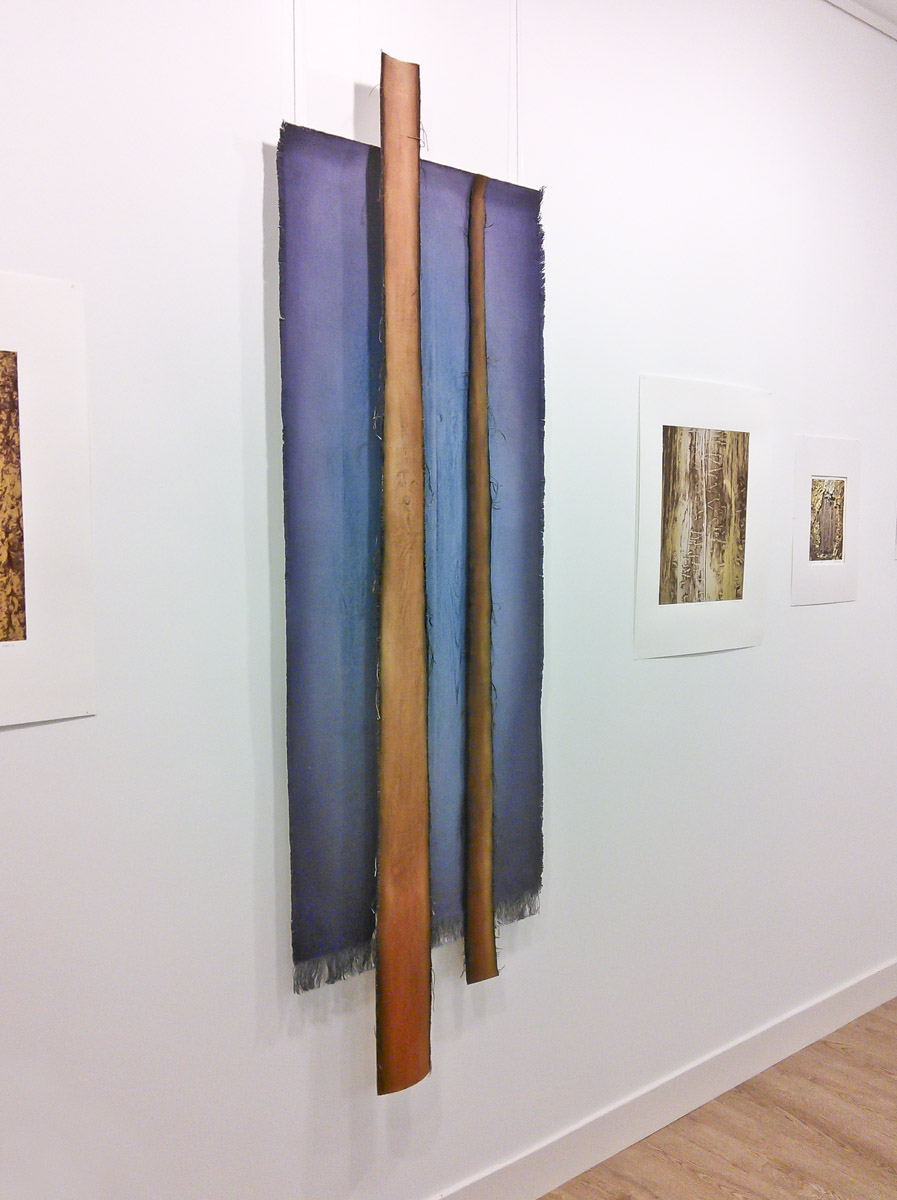 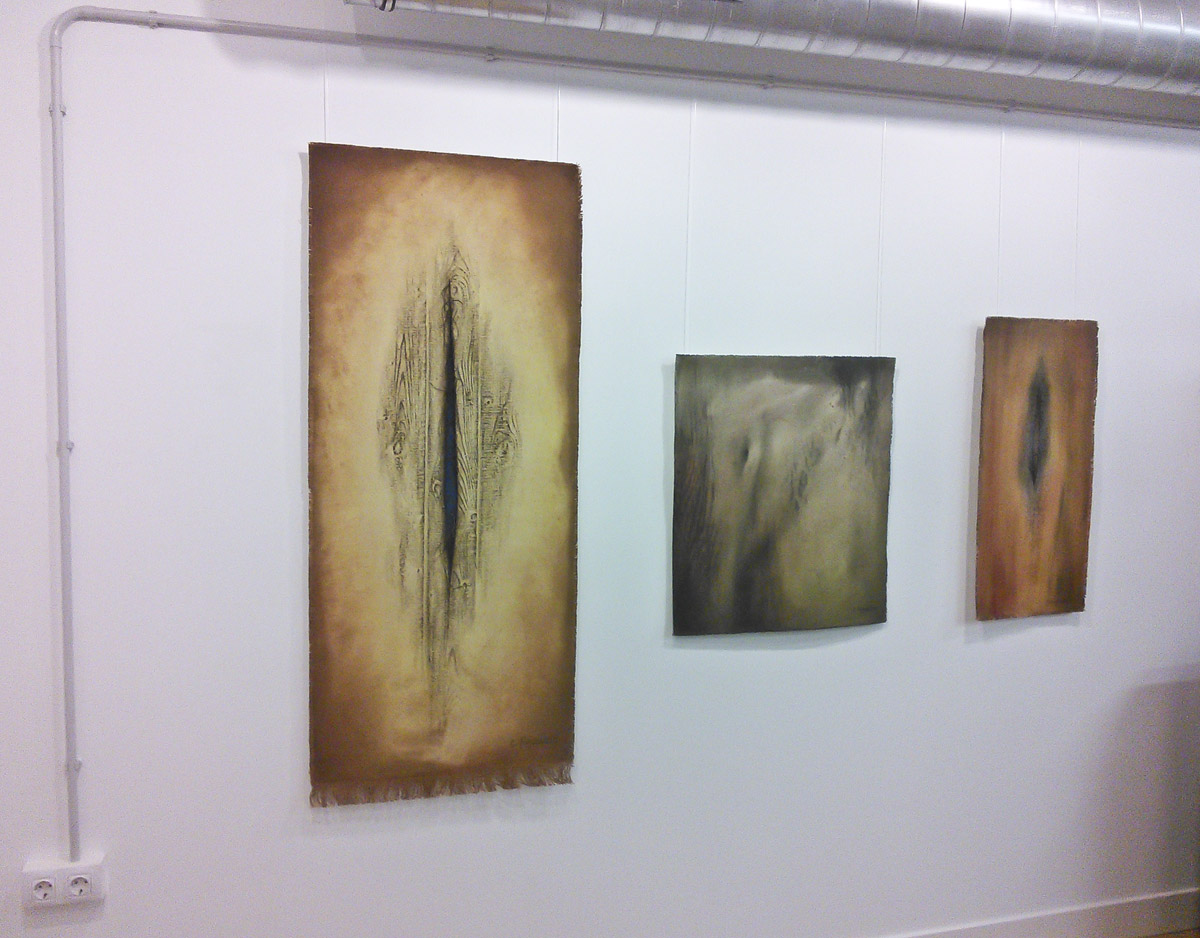 It took all of Thursday and most of Friday to hang everything, and we were very pleased in the end with how everything looked. Garikoitz was incredibly patient and calm throughout! He and Kizkitza generously provided refreshments and lots of local people showed up for the opening. It was great to reconnect with Juantxo and a pleasure to meet his wife, Eli, and their daughters, Araia & Laiene, as well as Garikoitz and Kizkitza’s mothers! Plus Alex, Joseba & Xabi from BoxA Elkarte, Sonia from the Casa de Cultura, Brian Cullen from the Tolosa visitor centre, and Ura. 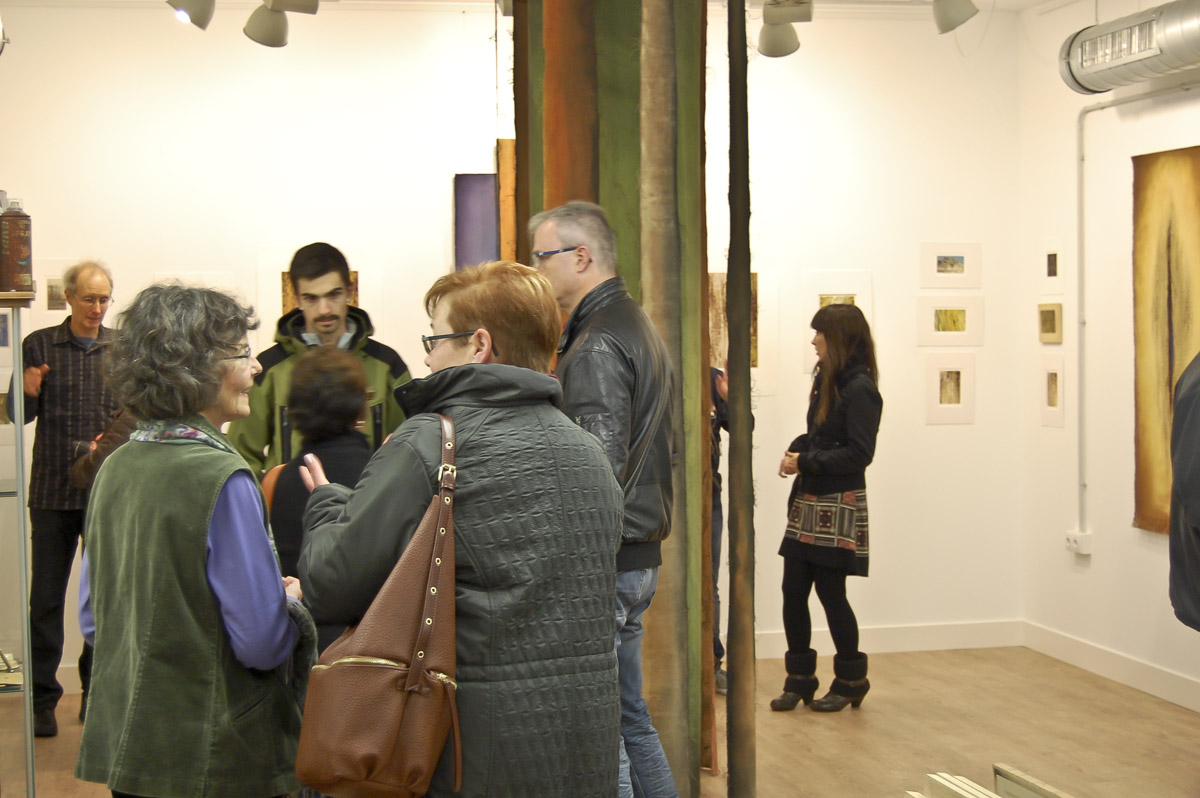 Garikoitz organized several interviews which resulted in two articles in Castellano (Noticias de Gipuzkoaand Diario Vasco) and one in Euskara. We really appreciated the interest and attention to detail of all the journalists who wrote about our exhibition.

On one of my free weekends, I visited friends in Antzuola and Zestoa. There are lots of trains every day between Tolosa and Zumarraga, and from there it’s not far by bus to these beautiful towns. The valleys are narrow and the roads are extremely windy! My friends were incredibly generous and hospitable and it was hard to leave.

My friend in Zestoa suggested I might want to visit the neolithic caves a half hour walk from town, and I took her advice. While not as large a site as Altamira, the Ekain Berri cave paintings are very evocative. Like Altamira, it’s a replica site; the actual caves are a little farther up the road. This museum has an exhibition space which was showing contemporary art inspired by cave paintings. I’m really glad I went.

A lovely fall day for a walk to the Ekain Berri caves.

Iñaki Extebeste and Amaia Pavon had told me about a festival taking place in Tolosa on this particular weekend, so when I caught the train back from Zumarraga, I phoned to arrange a time and place to meet. Unfortunately, they were both sick, but I remembered Garikoitz had invited me to help out with a youth mural project at the same festival, so I planned to look for him at the underpass they were going to paint.

I hadn’t realized the scale of the festival, though. When I got off the train in Tolosa, the streets were filled with tens of thousands of people and the auxiliary train station, Tolosa Centro, was shut down for the day. I hadn’t arrived in time to catch the scything competition, wall climbing, paddling or many, many other contests, but large throngs of young people marched through the streets singing together while bands played and vendors hawked food, drinks, crafts, and prisoners’ rights.

When I found Garikoitz and his friends, they had finished their mural and were staffing a Gko Gallery table. Sales had been slow, so I offered to help pack it up after dropping my things off at the hostel. By the time I got back, though, they were already done and were heading to the musical finale. “Come on, Bill! If we get separated, look for the big cardboard hand,” they shouted, waving a cutout arm.

As we picked our way through the crowds – mainly teens and young adults – I learned that “Ahora! Kilometroak 2013 Tolosa” raises money for Basque language instruction in schools. Just as I was trying to absorb this fact and the incredible excitement in the air, Gatibu’s music began to blast us in the warm light of sundown.

Part of the crowd at the KMK13 finale. Photo courtesy of KILOMETROAK 2013 – TOLOSA.

I found myself in the middle of a giant mosh pit, with thousands of young people singing along with the band, chanting, waving Basque flags and Repatriate the Prisoners flags. Wow. I couldn’t imagine a similar event taking place in Canada – maybe Québec – but this was incredible.

I think this is Gatibu’s Gaizka Salazar. We are somewhere in the crowd between the top of his guitar neck & the tents. Photo courtesy of KILOMETROAK 2013 – TOLOSA.

Gatibu is based in Gernika-Lumo and their name means “captive”. I was able to sing along on the chorus of their song “Gabak Zerueri Begire” as the lead singer danced about on stage, at times with a three-year-old girl on his shoulders. It was a lot of fun.

When the concert ended, we started heading towards the old town centre that’s filled with bars and cafés, and I fell into a conversation with a French Basque woman who had been to James Bay, Québec last year with her husband. I asked where in James Bay they had stayed, if it was anywhere near … Moose Factory? Then, just as I started to ask if she had read any of Joseph Boyden’s books, at the very same moment we both spoke aloud the titles “Through Black Spruce” and “Three Day Road.”  The hair stood up on our arms at the surprise of the coincidence and we laughed our way into Tolosa’s night scene…

One day after my shift at Eskulan I stopped in the old medieval centre of Tolosa on my way back to Zuloaga Txiki to pick up my repaired shoes and buy some cheese. I had been practicing a Basque phrase for about half an hour (gazta pixka bat mesedez = literally, cheese + a little bit + one + please) and mentally prepared myself to blurt it out. I was rewarded with a tasty wedge of semi-cured sheep cheese from the Idizabal region south.

Looking into the GKo Gallery window.

As I walked out of the deli, I saw that the GKo Gallery, which Brian at the Tolosa Tourism office had told me about, was open. GKo is a unique enterprise that sells work for some Chilean artists who in turn sell art by Basque artists. It’s name is a clever Basque play on words.

Garikoitz Cuitlahuac Murua Fierro greeted me with a big smile and we fell into a long and interesting conversation about earning a living as artists, as well as copyright, culture and food (a typical mix of topics for many artists!)

His mother is Mexican, hence his Aztec middle name, so I found his Spanish much easier to understand than some of the Castellano I had been struggling with (I had first learned Spanish in Nicaragua). I was excited to learn that he works in silkscreen as well as murals. It’s always a pleasure to chat with one’s peers about a common craft, and we compared notes about various low-tech exposure methods.

I had brought a silkscreen for Juan Barbé and had been wanting to find a way we could test out a sunlight photostencil exposure of his logo so we could do some printing on hand made papers. But for this I need photoemulsion.

I asked where I could buy some and he gave me a name and phone number for someone in Usúrbil, which is west of Donostia. Two other people had mentioned this contact before, including a T-shirt printer I had met in Deba at the beginning of my trip. I had stayed in Usúrbil for two days last year and liked it. Maybe I should take a little train detour back up there…

Just as I was pondering the logistics of this, Garikoitz said if I only needed a little emulsion, he could get me some from the co-op studio he was part of. We arranged to rendezvous the next morning at the “cigarillo” pastry café by the music school and Tolosa Centro train station downtown – a short bike ride from the Zuloaga Txiki hostel where I was staying.

He showed up on his bici and I followed him through downtown into an old industrial district where the Boinas Elósegui beret factory used to be. Eventually we arrived at the Boxa Arte Elkarte studios in an old warehouse. The town provides this space to a group of local artists in exchange for their participation in community projects and contributions to the culture of Tolosa.

There’s a large shared studio space, a workshop, and a silkscreen printing studio, complete with a darkroom, exposure unit, washout room and a four colour T-shirt press. There are washrooms, showers, and downstairs, a kitchen and lounge that makes it possible for visiting artists to stay while working on a project. Very cool.

Garikoitz poured some Murakami emulsion – my favourite brand! – into a jar and taped it  up for me to prevent spills. I contributed some Euros to the studio cash box and cycled back up the road to Eskulan to show Juan my exciting find…

P.S. At the end of November, 2013, GKo Gallery won a Gipuzkoa business & tourism prize in recognition of their innovative work since 2008 – zorionak! ¡Felicidades! Congratulations!